This is my cousin, my mother’s brother’s kid, Miles “PYGMY” MacDonald. He is a hip hop flavored poet like me. We write and recite back and forth and generally share the same tastes when it comes to music, life and beer. We like music hot, life chilled and beer cold.

Pygmy is fluent in kiSwahili, a skill that has landed him earning dollars transporting diesel fuel from the Tanzanian border into the jungles of the DRC. This is no joke. He operates the lead vehicle in a convoy of twenty trucks, each with a capacity of around 20 000 litres of fuel. The fuel gets taken deep into the forest to a gold mine, one of many, run by some South African. Sounds simple enough until he tells you how a country that once boasted over 100 000 kilometres of servicable roads has seen that reduced to just over a couple of thousand. The rest has been reclaimed by the jungle, which means a combination of flaura and fauna together with rebel fighters engaged in a seemingly endless conflict over, well, plenty of things. Mainly it’s about who gets the right in which area to stop the convoy and demand ransom. Pygmy knows this, because he has sat down with the rebel leader and the government leader at the same time, in the same village. They weren’t negotiating. They were having a beer and a chat. These two men are cousins. Then they go off to run their respective armies.

Essentially my cousin has to be prepared for anything, from a non-existant road and a village full of people who are looking to blame the nearest “mzungu” (in SA they are calleg “mlungu” meaning “that white person”) for the lack of any serious infrastructure, or a kid in a Spider Man mask with a Rocket Launcher who is looking to be bought off with a Playboy and a packet of cigarettes. I think this is what they mean when they talk about entrepreneurship in Africa. Needless to say, my cousin can get pretty jaded at times. On the one hand he seems to be living the adventure life that plenty of us Western and “developed world” consumers crave, complete with a chimpanzee as a pet and an intense wealth of green raw tropical jungle to lose yourself in. On the other hand there is the day-to-day stuck in the mud or eyeball-down-the-barrell-of-a-gun type of regular existance that he leads. 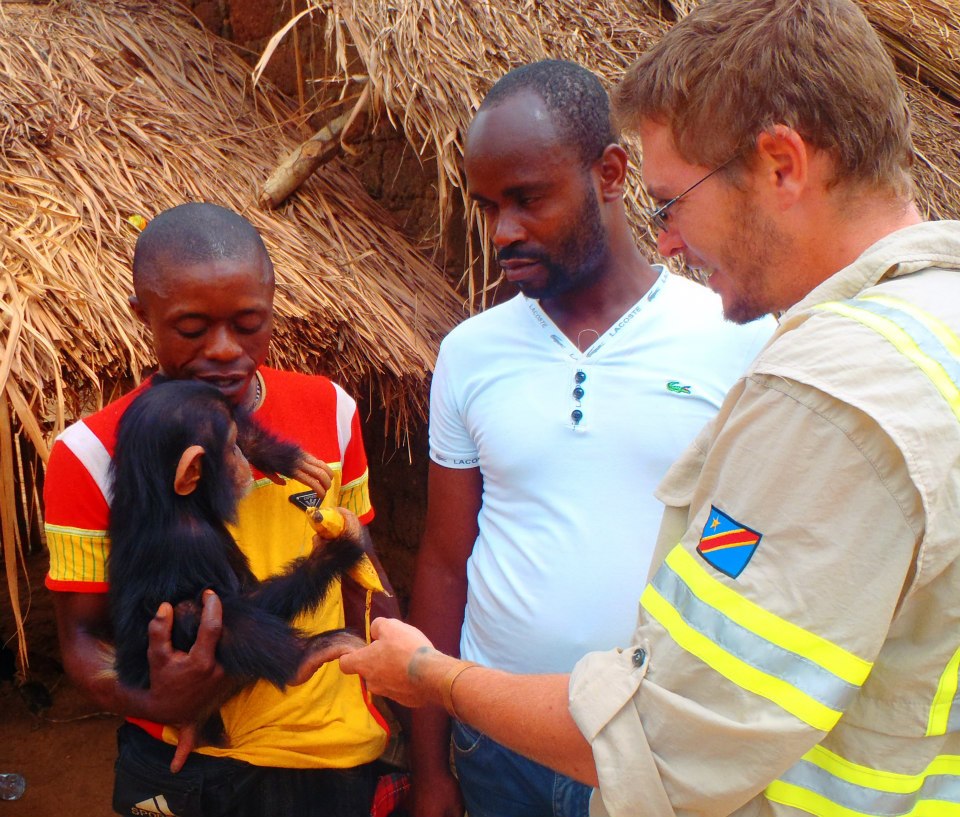 Did I mention that he is also a poet? A rapper, an MC of mean ability? Did I tell you how he is a qualified Yacht Captain, a superb fisherman, a humble human and a cheeky drunk when we have occassion to get a little loose together? All in all he is a pretty unique specimen, a genuine human being with both feet firmly on the ground, and you don’t get more grounded then Africa. There isn’t a country on this continent that doesn’t take it’s soil very seriously. Whether digging in it or building on it or remembering it or selling it or lying in it or standing on it, soil is the common ground. Before there were borders it was soil alone, and as the soil changed you could tell just where exactly you were, how far you were from water, how high you were above the ocean. Now it’s all passports and check points and pieces of string across the road attached to a couple of stoned soldiers with nothing better to do then wait for the next sucker to come straining and sliding along the mud.

Pygmy takes plenty of photos, mostly of work, but he has a section that is strictly about butterflies. That’s right, butterflies, because they were here first but they don’t have to claim it, and they don’t hassle him so he doesn’t have to hassle them, and they can choose to stay or fly away.

The one thing that grows beautifully in any soil in Africa is poetry. Pygmy manages to put his purpose down as staying open enough to it all to be able to translate it into rhymes and lines that let the rest of us know that there will always be more to Africa, more to the World in fact, then just the jungle.

I’m going to be keeping an eye on Pygmy from down South, while he keeps one eye on the road, one on the rebels, and his third eye wide on the butterflys inside.

4 thoughts on “Pygmy and the Butterflies”